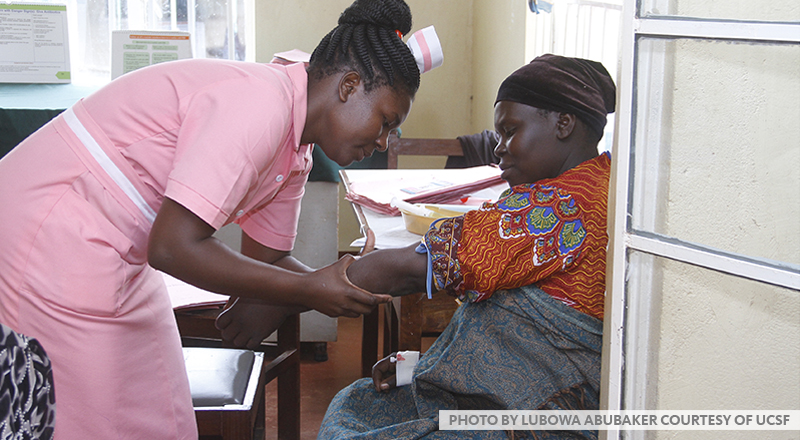 Ironically and sadly, giving birth is a killer in many parts of the world.

More than 303,500 women – 99 percent of them in developing countries – died during childbirth in 2015, according to the World Health Organization. In addition, some 2.7 million babies died in their first month, mainly from complications during pregnancy or childbirth.

“These deaths are unacceptable and largely preventable,” said Ndola Prata, professor of maternal and child health at the UC Berkeley School of Public Health. “Many of these women can be treated with simple procedures and medicines and saved if they had access to skilled health providers during pregnancy, childbirth and in their immediate post-partum period.”

In addition to safe motherhood and maternal mortality, Prata’s research interests include family planning, contraceptives and safe abortion, particularly in sub-Saharan Africa, which has the highest rates of maternal deaths in the world.

In poor countries, complications from pregnancy and childbirth are a leading cause of death in young women, aged 15 to 19, who have children before they are physically ready for motherhood. Furthermore, high fertility rates increase the likelihood of problematic labor and patriarchal customs often make women’s health and education unimportant.

Prata’s and other global health research are pushing governments to maximize their resources for women. Their studies call for an increase in the availability of maternal health care -- particularly for women in rural areas – legal and safe abortion services, and family planning programs include education on contraception, spacing out pregnancies and achieving desired family size.

Some policymakers and governments heeded research and advice and implemented programs to decrease maternal deaths. Indeed, from 1990 to 2015, maternal mortality declined 44 percent – from 385 to 216 deaths per 100,000 live births, according to United Nations interagency estimates. While this translated into an average annual rate of reduction of 2.3 percent, it is still less than half of the 5.5 percent annual rate needed to achieve a three-quarters reduction in maternal mortality targeted by the UN.

Women’s empowerment may be a key factor in pushing maternal mortality rates on the desired downward slide, said Prata, who is co-director of UCGHI’s Women’s Health Gender and Empowerment Center of Expertise (WHGE-COE). The center promotes research, education and community engagement, globally and locally, to reduce gender and health inequities.

“Empowerment is widely acknowledged as a process by which those who have been disempowered are able to increase their self-efficacy, make life-enhancing decisions and obtain control over resources,” Prata wrote in a special issue of the journal BMC Pregnancy and Childbirth in November of 2017. “Most countries now recognize the importance for girls and women to become more empowered, both as a goal in itself, as well as to achieve a more gender equitable society.”

In that publication, edited by the WHG-COE, studies showed that among poor women, higher rates of expressed empowerment correlated with lower levels of mistreatment by health providers during labor and delivery, group antenatal care was more empowering than standard care because of increased communication and learning in peer groups, and pregnant women who felt empowered via better coping skills prior to birth were less likely to suffer post-partum depression. Studies also found that women who are more empowered are more likely to use skilled birth attendants, which could lower maternal mortality.

While empowering women to improve maternal health and control their fertility has been in part successful, although still daunting challenging in many parts of the world, Prata and other researchers warn against treating women’s empowerment as a magic, one-size-fits all solution.

“Instead, in the context of scarce resources, it is important to measure the process, identify factors amenable to intervention and bring any transferrable interventions to scale,” Prata wrote in a review of women’s empowerment and family planning, published in the Journal of Biosocial Science. “To that end, more research using rigorous methods and innovative approaches should be conducted to lay the foundation for the implementation of evidence-based solutions.”

With growing urbanization and support from government-backed incentive programs and other innovations, women in developing countries are increasingly going to hospitals to give birth. In India, with historically high home birth rates, medical facility deliveries have increased from below 20 to 85 percent in the last 10 years, said Dominic Montagu, UCSF professor of epidemiology and biostatistics. Other countries have made similarly impressive strides.

That giving birth in a clinic or hospital has gone from a rarity to the norm, is a good thing, especially for poor women who previously lacked access to skilled health personnel and modern hospitals.

But despite the improved access to care and referral systems, maternal and neonatal mortality rates remain stubbornly high, said Montagu.

He co-leads a project, titled Strengthening People-Centered Accessibility, Respect and Quality (SPARQ), which is getting to the crux of what works and what doesn’t for women’s maternal and reproductive health care.

In Kenya, SPARQ partners with seven public facilities in and around Nairobi, focusing on delivery, family planning and post-abortion care. In India, the project collaborates with nine locations in the Uttar Pradesh region.

The SPARQ project, funded by the Bill & Melinda Gates Foundation and David and Lucille Packard Foundation, is learning what women need and want by conducting in-depth interviews with clients and care providers and managers. Guided by this new information, SPARQ is improving the quality of people-centered care in ways that are measurable, affordable and replicable.

“By creating a validated scale for what women feel is most important when giving birth, having an abortion or getting family planning, SPARQ has made it possible for women -- and for women’s groups and community organizations -- to demand appropriate and high-quality person-centered care, and to both specify what that means and identify when it is lacking,” said Montagu.

“We are interested in understanding the concrete ways in which providers and health facilities can provide respectful and dignified care to women so they feel as though their needs, values and preferences are heard,” said May Sudhinaraset, SPARQ co-lead and assistant professor of community health sciences in the UCLA School of Public Health.

In its three years, SPARQ has made some interesting, surprising and revealing observations.

In India, which since 2005 offers cash incentives to women who deliver in hospital facilities, many women from rural areas often delay their arrival as long as possible when they feel that the facilities are inadequate, understaffed, unclean or unwelcoming.

Coming in late in labor or when the baby is breeching increases the risk of complications. So, centers are not only addressing staffing and facility issues, they are including the importance of timely arrival in education materials and assessing transportation needs for women.

Women in India and Kenya have different views about privacy, said Montagu. “Privacy is a human right and an important indicator of quality person-centered care according to the WHO,” he said. “That makes sense to us, as Americans, and we found it to be true for women giving birth in Kenya as well. But not in India. There, privacy was associated with loneliness and increased risks of mistreatment. Women in our Uttar Pradesh sample regarded privacy as an indication of worse person-centered care. This was quite unexpected to us.”

SPARQ research in Kenya found that disadvantaged women receive the lowest quality of patient-centered maternity care, especially when they seek care in higher-level facilities. Those who are poor, unemployed, illiterate or younger suffered greater indignities and received less information about their care than women who were better off and more empowered.

Researchers there have made policy recommendations, including expanding investment in mid-level facilities, assured access for rural women through funding for transportation infrastructure, travel vouchers and residence support before and after delivery, and dedicated maternity wards in larger institutions.

Ndola Prata believes that having more women in leadership roles mean more policies that are pro-health and pro-children. As an example, she points to Rwanda, where 65 percent of its Parliament are women.

Rwanda's maternal mortality ratio decreased by 77 percent between 2000 and 2013 and under-5 child mortality has been reduced by more than 70 percent.

Sudhinaraset agrees. “Countries that focus on putting communities, and women and girls in particular, at the forefront are seeing gains in women's reproductive health, including maternal care.”

“In practice, this means working closely with and engaging young girls in solutions to reproductive health in a participatory manner,” she said. “Examples of where this works include India, where women serve as leaders in their communities and interface with policymakers to make sure their demands and needs are known. Other examples are community support groups, where peers support one another through the reproductive process-- whether it be antenatal/prenatal groups or post-abortion support groups. Women serve as the best support system for one another in communities where certain health services are stigmatized.”

Person-centered maternity care in low-income and middle-income countries: analysis of data from Kenya, Ghana and India

Abortion history and its association with current use of modern contraceptive methods in Luanda, Angola