Ambassadors show how to protect the planet 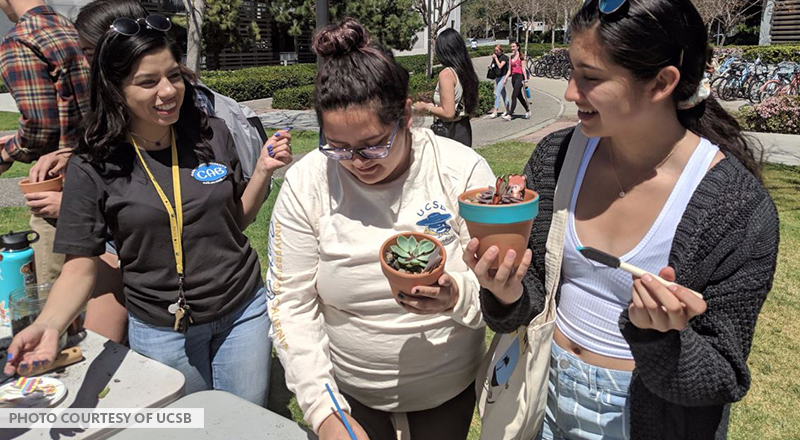 When it comes to supporting healthy environments and populations, students from across the University of California (UC) have the right stuff.

Their majors range from health, environmental and geosciences to urban studies, psychology and anthropology. Many are planning careers to tackle climate change, rapid population growth, food security, vanishing natural resources and other threats to the health of the planet and its human, animal and plant populations.

For now, the nearly 30 members of UC Global Health Institute’s (UCGHI) Planetary Health Center of Expertise (PHCOE) Student Ambassador Program spark awareness of planetary health and sustainable development issues at all 10 UC campuses. The program, established in 2018 by the PHCOE, encourages student, faculty and staff involvement in an emerging field that could shape the future of populations – human, animal, plant – as they cope with impacts from climates changes and a growing human population.

“The human population is growing exponentially and is currently over seven billion people,” said Brittany Theilen​, a UC Santa Barbara graduate student in earth science and a COE ambassador. “It is up to us to utilize sustainable resources to keep the planet healthy.”

“To me, planetary health refers to the well-being of our physical planet – the ocean, land, atmosphere, air quality and more – and the well-being of the people, animals and plants that reside on our planet,” said ambassador Manya Balachander, a second-year UC Santa Cruz student majoring in community health and psychology.

Balachander said that planetary health experts don’t just look at the effects of environmental change on the health of populations, but they also study the social, political and economic structures and systems that govern those effects.

Showing the way throughout UC

Lisa McAllister, co-director of the ambassador program and the outreach, fundraising and research coordinator for the PHCOE, explained that students were encouraged to identify a clear need at their campuses, devise an educational and outreach event, and coordinate with existing campus programs to cultivate involvement and dialog in planetary health.

She noted some of the events:

The presentations and events were not just to preach planetary health. Many of the events were designed to gather perspectives from other UC students.

One example was an ambassador event in April at UC Santa Cruz, where Isabella Kressman, a senior majoring in anthropology and environmental studies, partnered with Manya Balachander to host the “World Health Café.” Over food and drinks, students and faculty discussed global and planetary health issues.

“I definitely learned a lot from the participants in the World Health Café and felt so lucky to hear their stories and voices,” said Kressman, whose studies focus on social justice theory, sustainability and archaeology.

“I remember one student in particular who told us about her experience visiting her family in Turkey,” said Kressman. “She was struck by the varied experiences of refugees of different economic backgrounds. It was really amazing to hear about her personal experience with something we see every day on the news, and maybe we don't get the chance to consider the wider range of human responses to global situations.”

“Another student told us about a high school project she was part of, one where students created bio-luminescent succulents to serve as nightlights for children in war-affected regions,” she said. “These would comfort children suffering from PTSD, and who did not have access to electricity. The biggest problem for her team was actually delivering the nightlights.

“I thought it was symbolic of the times, because for all the amazing technological advancements being made, we still have major issues of accessibility,” said Kressman.

Fellow ambassador and event partner Balachander recalled responses to a question asked to all students participating at the café: “Who do you trust to mediate your health within your environment?”

“The overwhelming response was that people trusted their mothers the most,” said Balachander. “In unpacking this conclusion even further, we came to realize that it is necessary to care for our planet and the health of those that live on it in the same way that a mother cares for their child -- unbridled, unconditionally and ever ready to change for the greater good.”

Joining the ambassador program “has given me a platform and tools to listen to my peers,” said Kressman.  “Solving today's challenges is an interdisciplinary challenge. I love being a part of the UC system and the Planetary Health COE, because there is an emphasis on collaboration between students from all disciplines.”

Balachander added: “The program has given me amazing opportunities to network with faculty interested in health from both community and global levels.”

“I've always been interested in mental health, and since my first study abroad experience in Ankara, Turkey, my passion for refugee resettlement and refugee advocacy led me to want to look at migration from a local and global scale,” she said.

Eventually, Balachander would like to apply what she has learned as a planetary health ambassador to explore a career that “creates and sustains feasible migration policies from a global, planetary scale.”

One of the goals of the PHCOE’s Planetary Health Student Ambassador Program is indeed to mentor bright, young people who already have an eye on improving planetary health, said program co-leader Dr. Sophia Papageorgiou, a veterinarian and researcher at the UC Davis hub of the UCGHI Planetary Health Center of Expertise

“We’re training the leaders and future trainers of planetary health,” she said.

Ambassador and UC Santa Barbara graduate student Brittany Theilen​ hopes to be a person of impact in planetary health. Theilen​, who coordinates the PHCOE ambassador effort at her campus to provide solar lights to midwives in Bangladesh who deliver babies of refugee mothers and mothers living in rural areas, studies raised beaches on Livingston and Joinville Islands in Antarctica to understand apparent climactic differences between the Western Antarctic Peninsula and Eastern Antarctic Peninsula.

With this knowledge in earth sciences, she hopes to become an outreach professional regarding natural disasters.

“With a career in environmental outreach, I would be able to reach numerous circles of people and educate them on planetary health as it relates to natural disasters,” said Theilen. “I want to make people aware that the choices they make today affect future generations. We cannot stop what we have already done to our planet, but we can mitigate the future effects by living more sustainably,” said Theilen. “Planetary health shapes how I want to present to others as an outreach professional.”

In an article for UCGHI last year, Dr. Papageorgiou wrote:

“We are living in a pivotal moment of history, with a short window of time to shift the trajectory of our planet’s populations and environments.

“If we implement changes in energy use, land use management and consumption now, we can still have a positive impact on our human footprint around the globe.

“Every person makes a difference.”

Current COE planetary health ambassadors could be those difference-makers.