Dr. Tom Coates Reflects on a Trailblazing Career as he Fulfills his term as UCGHI Director 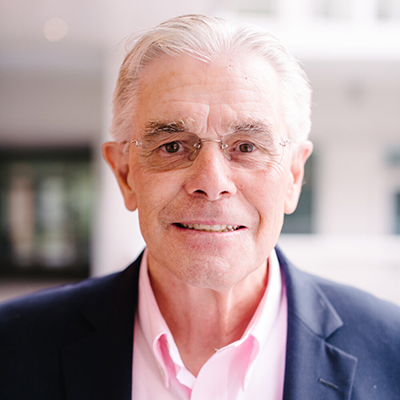 It is not an exaggeration to say that Dr. Tom Coates, PhD–the UC Global Health Institute’s outgoing director–is a trailblazer in the field of Human Immunodeficiency Virus (HIV) and Acquired Immunodeficiency Syndrome (AIDS) prevention research. And throughout his decades within the UC system, he has also been a trailblazer in the field of global health.

His career began at an important time in medical history. Dr. Coates completed his PhD in Counseling Psychology at Stanford University in 1977 with an emphasis on the applications of psychology to health and medicine. He then found himself in what he calls his “dream job” at the University of California San Francisco (UCSF) in 1982. “This was ground zero of the HIV epidemic,” says Dr. Coates, where he realized that his background in chronic disease prevention could be applied to HIV. “It occurred to me,” he says, “that maybe HIV is a preventable disease. We didn’t know at that time what caused HIV disease but we did know that it was transmissible. So, we thought we could take what we learned in prevention of heart disease and cancer and apply it to HIV because there were no other remedies or treatments other than prevention and behavior change."

From this realization, he worked with Drs. Leon McKusick and Steve Morin on a study named “The AIDS Behavioral Research Study” funded by the National Institutes of Mental Health (NIMH). "At the time, the words 'gay' or 'men who have sex with men' could not be used for NIH studies as this was the Reagan era," says Dr. Coates. This funding led to the NIH funding and founding of the Center for AIDS Prevention Studies (CAPS) at UCSF in 1986. CAPS is still thriving today and continues to be an enormous source of pride for Dr. Coates who served as director from 1991-2003.

The work that Dr. Coates did with CAPS led Haile Debas, MD (director emeritus, University of California Global Health Institute and chancellor emeritus of UCSF) to see the need for a multi-disciplinary approach to HIV clinical and prevention research which would create a more robust response to the AIDS crisis. So, Dr. Debas turned to Dr. Coates to lead the establishment of the UCSF AIDS Research Institute. Dr. Coates became founding executive director of the Institute (serving in the position between 1996-2003), which is a collaboration in social and behavioral science, biological science, and public health. The UCSF AIDS Research Institute also continues to thrive today.

During his time at UCSF, Dr. Coates utilized his research in the political arena where he worked with Nancy Pelosi’s first congressional campaign in 1986. Once elected, she became a leader in Congress in addressing HIV. He also worked closely with her office to pass landmark HIV/AIDS legislation such as the Ryan White Care Act and The AIDS Prevention Act.

As Dr. Coates’ work in AIDS prevention progressed, he, along with other investigators in the field of HIV/AIDS realized that the condition “wasn’t just a U.S. problem, or a gay men’s problem, but also a problem in Sub-Saharan Africa,” he says. In the late 1980s, he visited Africa for the first time going to Kenya, Uganda, Botswana, and Zimbabwe. It was from that point forward that he became involved in global health work. “The balance between the local and the global was really important,” he says, “because they can really feed each other.”

This work led him to conduct research funded by USAID and the WHO on the efficacy of the behavior change and prevention model of HIV voluntary counseling and testing programs in Kenya, Trinidad, and Tanzania. This work resulted in him becoming co-director of the NIH-funded HIV Prevention Trials Network (HPTN) between 1999 and 2006. “In that time, we conducted Project Explore, a large study that involved over 4,000 gay men in six cities to determine if counseling and testing were as good as more elaborate counseling models,” says Dr. Coates. “We found that it reduced their risk behavior which then reduced their probability of contracting HIV.” This HIV counseling and testing (HCT) model is now widely used across Africa.

Dr. Coates then led Project Accept in South Africa, Zimbabwe, Tanzania, and Thailand which showed that community-wide HIV counseling and testing resulted in substantial risk reduction among men and among persons with HIV.  Dr. Coates’ research in South Africa and Malawi continues to this day. He also collaborated with investigators in South America and Asia on HIV prevention clinical trials.

Then in 2008, when Dr. Coates had been firmly rooted in global health work, Dr. Debas once again approached him to “bring together global health institutes across the University of California system.” This new center, now known as our very own UC Global Health Institute, was founded on the principles of multidisciplinary and multi-campus collaboration and the interconnectedness between California and the world. It is where Dr. Coates served as co-director from 2010-2016 and then as director from 2016 until he steps away from the position later this month. “The Global Health Institute is an integral part of California health,” says Dr. Coates. “We care about the health of Californians and the health of the world. Our health is bound together. We want our science and our students to be globally focused as well as locally focused.” As Dr. Coates looks back on his work, he is incredibly proud of setting UCGHI on a sustainable course and finding a permanent home in the UC Office of the President’s UC Health Division.

As he is eagerly looking forward to the new chapter in his life, Dr. Coates also looks back on his work in HIV/AIDS and his experience as a gay man. He sees this month’s Pride celebrations through a lens of progress in both areas. “In the early days of the HIV pandemic, it was also a fight for gay rights,” he says, “there was so much stigma attached to the illness.”  So much of global health is a fight for equality and rights for all.

It is in that mindset that he reflects on this month’s celebrations: “Pride month is a celebration of the changes that I’ve seen over my life. At the same time HIV is a very different disease than when I was diagnosed with it in 1985. People with HIV with access to medicine will live as long as people without HIV. It’s a very different world, so it’s a celebration that’s been accomplished both in HIV/AIDS as well as LGBTQ+ rights as well as the right to health for everyone in the world, no matter how rich or poor they are or where they live.”