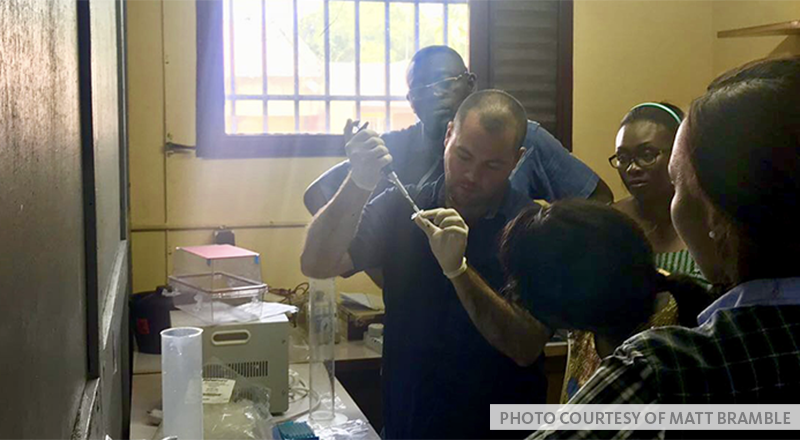 When Matt Bramble traveled to the Democratic Republic of Congo in 2017 as a GloCal fellow, he planned to help with an ongoing Ebola study.

Instead, since the fellowship began, he’s helped the country establish a functioning genetics-focused laboratory and used that lab to train Congolese researchers in genetics research techniques. He’s also working to expand a project using imaging technology to help identify whether Congolese newborns have Down syndrome through a photo of their faces taken with an iPhone.

“My research focus has done a complete 180,” he said. “Research-wise, I am all over the place, but it’s coming together at a rate that is simply staggering and I am truly excited to see what will come from the building of true collaborations with researchers and students in the Democratic Republic of Congo.”

Sponsored by the National Institutes of Health Fogarty International Center, the GloCal Health Fellowship is managed by the University of California Global Health Institute. Fellows spend 11 of the fellowship’s 12 months at one of 20 partner sites in 17 countries. Now in its seventh year, the program is designed for U.S. doctoral students, professional students and postdoctoral fellows, and foreign postdoctoral fellows from affiliated sites.

The program focuses on three key areas: capacity building within the partner countries, promoting research that has a broad impact, and building a pipeline of researchers for the University of California system.

An important part of the program is the relationship between fellows and their mentors. The mentors help fellows through all steps of their research process, from writing an application to executing a study, collecting and publishing data, and moving from analyzing that data to getting subsequent grants for additional research.

Susan Meffert, an associate professor of psychiatry at UCSF, is one of the global mental health experts on the program’s mentorship team and a member of the GloCal Steering Committee.

Meffert both recruits applicants and mentors fellows who have been accepted to the program. She looks for “talented people who have good ideas and are in a position to use their knowledge to really further the cause of closing the mental health treatment gap,” in low and middle-income countries, she said. “That’s a massive problem facing the field right now.”

Ideal candidates have strong relationships with policymakers and “appear promising and like they’re going to use the training to move forward and not stop the work at the end of the program, but rather use it as a springboard to keep going,” she said.

That’s the case for Hendry Sawe, Head of Emergency Medicine at Muhimbili University of Health and Allied Sciences (MUHAS) in Tanzania. Sawe applied for and received a GloCal fellowship in 2014.

“I applied for GloCal because I wanted to learn and receive mentorship on how to conduct the best clinical research that solves patients’ problems in our settings,” he said. “GloCal was indeed a wonderful necessary step in my career path towards clinical research, and I am forever grateful for the opportunity.”

Sawe now acts as a mentor to current GloCal fellows, is the principal investigator for the MUHAS site, and, like Meffert, is a member of the GloCal Steering Committee.

Sawe provides support, guidance, mentorship and oversight of MUHAS’s GloCal applicants, fellows and mentors as the site’s principal investigator. He provides information about opportunities and connects different people and groups with common interests. As a steering committee member, he helps select the best candidates to be fellows and provides his perspective on the program more broadly.

“I feel that this program and its goals are really, really wonderful and provide fair and equal opportunities for scholars from different social, economic, cultural and national backgrounds and beliefs, from all over the world, to learn and meet their research career goals,” he said. “Very few such programs exist.”

As a site mentor for the Universidad del Valle de Guatemala site, Kimberly Brouwer, an associate professor at UC San Diego’s Division of Global Public Health, has seen enthusiasm for the program grow over time and the difference it’s made.

“I think in the past a lot of Guatemalan researchers would go to the United States or to other countries for postdoctoral opportunities, and it’s great that now this is an opportunity for them to continue their work in their own country,” she said. “I really think it’s helped to start training the next generation of local researchers in Guatemala.”

The program is “essentially a Fulbright equivalent in that you’re spending really a sizable amount of time in a country and building up relationships that are going to last for the rest of your career.”

In addition to helping researchers build relationships, the program helps them builds skills they’ll need for successful global health careers. For Javier Cepeda, his GloCal fellowship from 2016 to 2017 was helpful training for his current position as an assistant professor in the Division of Global Public Health in the Department of Medicine at UC San Diego.

Cepeda applied for the fellowship to perform economic modeling of an intervention in Tijuana, Mexico, to train the police force to help reduce new cases of HIV. Strategies included, for example, not confiscating needles, or sending users to harm reduction programs or methadone clinics rather than prison to create “a better alignment of policing with public health,” he said.

The mentoring included in the program was invaluable in helping him crystallize short and long-term training goals and research goals, and to think through his career trajectory, Cepeda said. The fellowship was also his first experience managing resources for research.

“It was the first time I had an independent research project that I was the PI of, and I was managing a team,” he said. “It was like running a small business, and that’s really helped me now as an assistant professor.” The fellowship also helped him in learning how to work with colleagues who are not U.S.-based and in “understanding that things worked very differently in other parts of the world, and a lot of it’s just knowing the right people, that can open up a lot of doors.” He has continued the research he began in his GloCal fellowship as a professor.

For Bramble, now a staff scientist in Eric Vilain’s lab at the Department of Genetic Medicine at Children's National Medical Center in Washington, D.C., the most exciting part of his work in the Democratic Republic of Congo is coming to fruition.

In his year in the country, he taught many young medical doctors and researchers, some who had “amazing potential.”

“I simply didn’t want that to end when I left,” he said. Through coordination with researchers at the site and with Vilain, two students from the Democratic Republic of Congo will come every six months for the next five years to Children's National Medical Center to train with Bramble in genetics research techniques. The first group of two students recently arrived.

“This is probably what I am most proud of,” Bramble said.