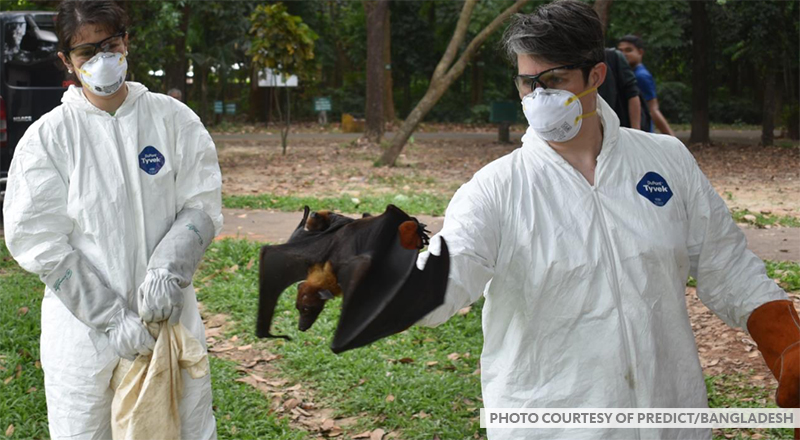 Ebola, H1N1 flu and other outbreaks in the past decade have killed hundreds of thousands of people around the world.

Middle Eastern Respiratory Syndrome (MERS) and Zika emerged from their hiding places just a few years ago, surprising and frustrating public health experts and scientists who could only respond to these infectious diseases, rather than prevent them.

Now, scientists and others take a proactive path to confront these viruses before they devastate populations and threaten global economies.

A UC Davis-led program – PREDICT – discovers and detects viruses, many of which move between animals and people and can potentially trigger pandemics.

Importantly, PREDICT develops projects all around the world, so that regions can find the lethal viruses on their grounds, solve mysteries of poorly understood pathogens and become active players in what is truly a global fight to prevent death and illness.

“If we can find where the viruses lie in wait, we can head off or better manage outbreaks while they are local,” said Christine Kreuder Johnson, professor of epidemiology and ecosystem health in the UC Davis School of Veterinary Medicine, who directs PREDICT’s animal and human surveillance activities.

Researchers and other disease specialists can also map the source of an emerging disease and work quickly to contain it or develop life-saving vaccines and treatments, she said.

The U.S. Agency for International Development (USAID) launched PREDICT in 2009 as part of its Emerging Pandemic Threats program. Up to then, conventional approaches to epidemics had been mostly reactive. But booming human population growth, dramatic changes in land use and increased global trade and travel required a shift to a proactive and predictive way to detect and respond to the spillover of novel infectious pathogens from animals to human.

PREDICT is managed by the UC Davis One Health Institute, and in 2014 it received a five-year $100 million USAID grant to expand efforts.

“Many in the global health community realized that we were in an era of new and re-emerging global health threats, and we had to do more than react to these crises,” said Johnson about the birth of the USAID-PREDICT project. “We went all in for a longer-term, more strategic approach to global health security.”

PREDICT uses One Health’s holistic approach, and its disease surveillance strategy is based on the inextricable link between animals, humans and the environment. Its work is collaborative and transdisciplinary, said Johnson.

Its objectives may seem daunting, however, in its nearly nine years PREDICT has made great strides in reducing pandemic risk and promoting global health. The program, which operates and has partners in 31 countries, has:

Its project in Nepal typifies PREDICT’s comprehensive efforts to study and protect human and animal health.

In Kathmandu, rapid urban growth spurred by conflict and lack of urban planning has stressed the public health infrastructure, especially where there is intensified growth around former croplands, forests and along riverbanks. PREDICT-Nepal was initiated in 2011 to explore the risks of disease with the increased mingling of people and animals in a changing urban ecosystem.

PREDICT conducted surveillance where animals—including primates, bats and rodents—and people are in close proximity. It focused on areas such as highly trafficked urban centers, informal settlements and rural communities with bat consumption. Partnering with the Center for Molecular Dynamics in Nepal (CMDN), the program sampled thousands of animals – including testing rope samples that macaques had chewed on in temples – for viruses.

The team implemented a novel, inexpensive tool to produce specific data and allow for quick detection of potential pathogens. In addition, PREDICT surveyed people in areas with high human-animal contact to look at possible behavior risks that would expose them to potentially harmful viruses.

All that data and information will prove helpful for monitoring virus-rooted diseases in Nepal and even other parts of the world where there is similar human-animal interface.

Perhaps the biggest impact from PREDICT in Nepal is the expansion of a workforce that is now trained and better equipped to prevent or respond to a disease outbreak. PREDICT has trained a cadre of veterinarians, ecologists, lab personnel and managers with expertise in field surveillance, biosafety, animal handling, lab diagnosis and information management.

In collaboration with World Health Organization/Nepal and local organizations, PREDICT developed the One Health Alliance of Nepal. It is a platform to connect health-related systems and stakeholders to improve coordination of disease surveillance and response.

“Capacity building and strengthening are a hallmark of PREDICT,” said Woutrina Smith, professor of infectious disease epidemiology at the UC Davis School of Veterinary Medicine and a leader of One Health.

She points to examples of people in various countries who have joined PREDICT as part of the next generation workforce.

In Cambodia, Vibol Hol is now pursuing a PhD as he studies Nipah virus in bats. A research technician at the Institut Pasteur du Cambodge, he first joined PREDICT in 2011 to test wildlife samples and later became a field coordinator. Over the years, while completing graduate degrees in science, biodiversity and conservation, he has advanced his own lab and management skills and trained many others, including veterinary and medical students, in zoonotic disease surveillance.

Last year in the Democratic Republic of Congo, Guy Midingi Sopolo was sent to Likati, near the epicenter of the Ebola outbreak, to capture and sample bats and primates. He started with PREDICT in 2011 after working at the Kinshasa Zoo and being in charge of laboratory care at the Institut National Recherche Biomédicale (INRB). Over six years, he completed extensive training in PREDICT protocols, biosafety, field preparation safe capture and sampling of wildlife and information management. Now, he is an even more valuable asset to PREDICT and key member of INRB’s outbreak response field investigation team.

Lessons learned from systematic reviews of qualitative data in global

Can virus hunters stop the next pandemic before it happens?