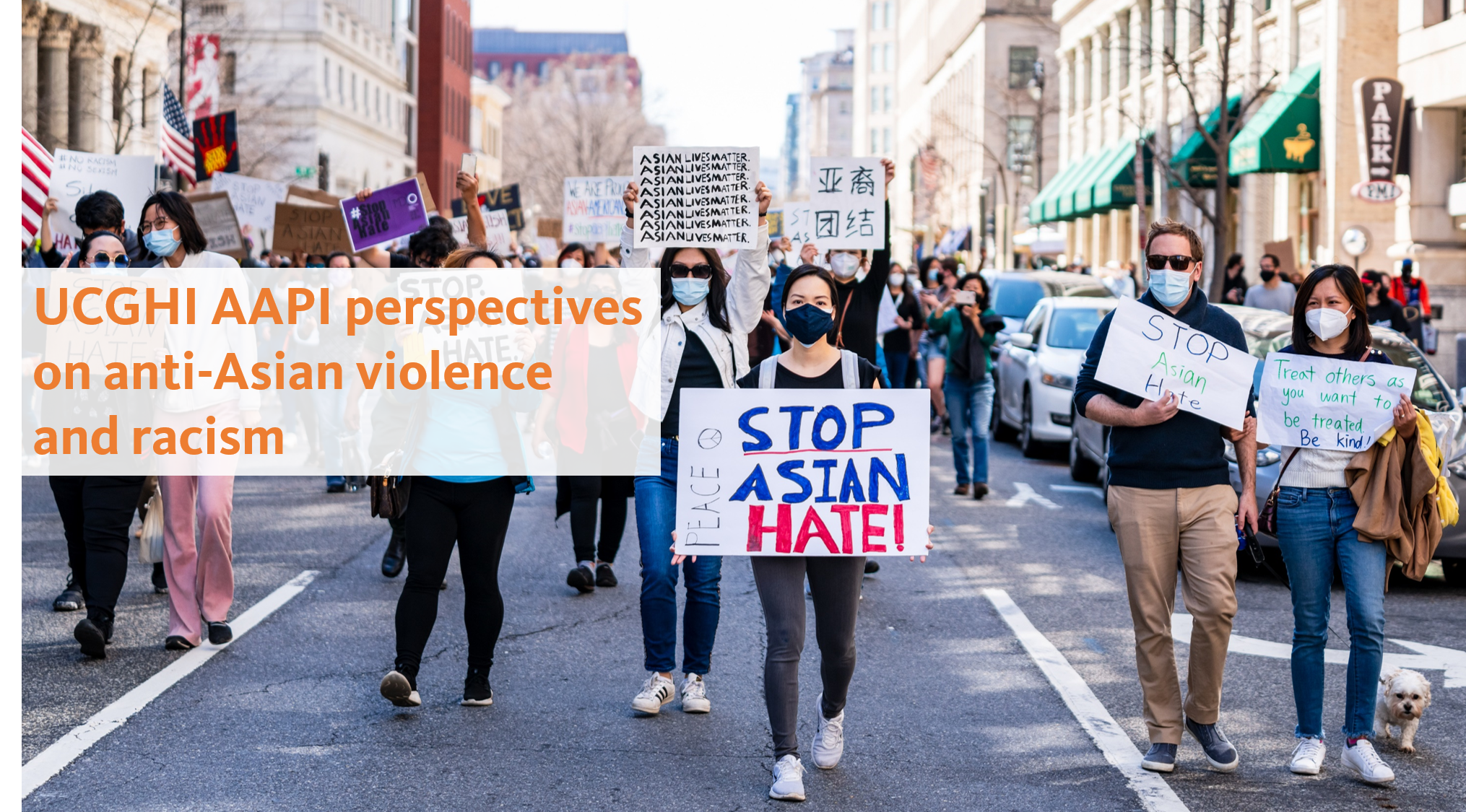 An increase in violence against Asian Americans and Pacific Islanders (AAPIs) throughout the COVID-19 pandemic, including the shootings of six women of Asian descent in Atlanta, has horrified and saddened many in the AAPI community and many other Americans.

The global health community has an important role to play in ending racist violence and raising awareness of the societal systems and structures behind this violence. Three AAPI members of the UCGHI community share their thoughts here about the violence against AAPIs, how it has affected them personally, and ways to end it. Their responses have been lightly edited for length and clarity.

As this UCGHI deputy director, program coordinator, and student ambassador note, ending such violence means fighting the consequences of the racism that engendered it, including stereotypes about the community and American society valuing white lives over the lives of people of color. To help continue the discussion and raise awareness about these and other critical public health issues, UC Global Health Day 2021 will focus on decolonizing global health to review how colonialism and racism have shaped global health and how to combat systems created by both.

As a first-generation Korean American woman, the past few weeks have been extremely difficult to process and emotionally exhausting. When colleagues and friends ask the simple question “How are you doing?” I have noticed a range of emotional responses from immediately tearing up and trying to keep it together, feeling completely numb and robotic, to just bursting out crying. My heart breaks for the eight victims, their families, and their communities. My heart breaks for those who worked hard for the “American Dream” to support their families and our country failing them and their families. My father, a Korean immigrant, was a hardworking small business owner and supported our family of five.

While I am glad that this mass shooting has had national media coverage, I have strong feelings about the way in which this has been covered. As this story was unfolding, one striking example was the way in which the national media began to humanize the white domestic terrorist while simultaneously minimizing the lives of the eight victims, including six women of Asian descent to the stereotypes that we have been working to overcome since the Chinese Exclusion Act of 1882. Headlines that read “massage parlor” and “spa” instead of “Asian-owned businesses” and focusing on the murderer’s “sex addiction” perpetuates the fetishization of Asian women and completely bulldozes over the lives of the victims and their humanity. In addition, the misspelling, mispronouncing, and thus butchering the ancestral names of the victims is so dehumanizing. And for those of us whose names have been mispronounced and butchered our whole lives, in our own country, this just adds to a lifetime of racialized trauma.

On the rise in hate crimes against AAPI throughout the pandemic

I am heartbroken to see that our Asian elders, the most respected people in our communities, continue to be targeted. Every day, I fear for my 67-year-old mother’s life when she goes on her daily walks. I fear that one day, it will be her. I am also sad to see that Asian/Asian-American women are also disproportionately targeted. As an Asian American, when I see, hear, or read about someone of Asian descent being attacked, it hurts my soul because many of the victims look like my parents, my sister, and my friends. It’s hard for me to articulate, but the impact is heavy.

The silence surrounding AAPI hate is equally painful. Not only has there been inadequate national media coverage during most of the pandemic, I have also observed little dialogue even in my personal and professional circles. In addition, I have been aware of my own silence because I have been struggling with how to speak up about the racialized pain and trauma of the AAPI community while also continuing to center Black lives…I feel that it is important to create space and dialogue on the ways in which white supremacy has harmed and continues to harm BIPOC [Black, Indigenous, and people of color] communities. I am grateful for our allies and realize how critical it is to have allies, especially in this moment because as an Asian-American woman, I was raised not to draw attention on myself. With this said, I am working on “unlearning” how I was raised – to keep quiet, swallow my pain, prioritizing the needs of others before my own, head down and work hard and the list goes on…However, during the pandemic, I have realized how important it is to speak up – not just for myself, but for my community and our elders because not speaking up has serious consequences. The videos and photos of racist attacks on my community are horrific, but what keeps me up at night are the bystanders who do very little or nothing to disrupt the violence. Each one of us must be ready to be a good bystander. I highly recommend Hollaback!’s free Bystander Intervention training to stop anti-Asian American and xenophobic harassment. We are in this together. Our lives depend on it.

The recent shootings in Atlanta left me feeling heartbroken and anxious. An attack on one feels like an attack on all. While trying to cope with the news, I was also engaged in many conversations, checking in with colleagues, friends, and family, as we all tried to process together. Needless to say, it was an emotionally exhausting week. I also felt extremely defeated. I saw, once again, the media was only focusing on the motive of the attacker and trying to unpack the mind of a man who fetishizes Asian women, while simultaneously aggregating the six women who were murdered as if they weren’t unique, multifaceted individuals. I felt defeated and not surprised seeing law enforcement officials show more sympathy for this man’s “bad day” than the victims that were murdered. It almost felt like the victims of the Atlanta shootings faced two deaths: the loss of life and also the erasure of their identities. This is an additional injustice.

On the rise in hate crimes against AAPIs throughout the pandemic

My heart breaks every time I see a video or photo circulating of a new attack against our elders. I recall a recent video of a 75-year-old woman who fended off her attacker with a wooden board. So many people in the comments section of the post were applauding her and acting like this was a win, but all I could see was the fear and pain in her eyes and all I could think about was, “What if this happened to my grandma?” It pains me to think so many people have come to this country for “a better life” but have been met with racism and more violence. I instinctively feel protective when I hear someone speaking with limited English, worrying the wrong set of ears might assume this person is uneducated, when really being bilingual makes this person more knowledgeable and courageous than any of us who do not know a second language. The COVID-19 pandemic has intensified anti-Asian sentiment, but racism against the AAPI community is not a new concept in the United States.

Racism as a public health issue and finding solutions

The rise in anti-Asian hate crimes is not just an American issue. Hate crimes have been increasing in Canada and the United Kingdom as well, making this a global health issue. Racism operates at the individual, intrapersonal, and institutional level in our society, making it a driving force of the social determinants of health, such as education, housing, and employment.

I believe we as a country need a reckoning of our racist policies and actions (i.e., red lining, slavery) and need to first give reparations before we can fully move forward. Declaring racism as a public health emergency is a first step and should be followed by strategic intersectional action planning and re-allocating resources. Intentional action planning needs to happen especially in US institutions like the criminal justice and health care systems in order to improve health equity.

As someone with hardworking parents who immigrated to the United States and gave up everything to raise my brother and I, I really sympathize with the victims and their families. These victims had lives of their own and families and friends that cared for them; to see them lose everything for simply existing is extremely disheartening.

On the rise in hate crimes against AAPI throughout the pandemic, racism as a public health issue, and finding solutions

The rise in hate crimes against AAPI throughout the pandemic further highlights how we as Americans need to be more proactive in addressing racial inequalities. The increase in awareness surrounding racial inequalities often occurs after violence (fueled by racism) has taken place, but violence shouldn’t have to occur in the first place for awareness to spread. Furthermore, simply calling to stop Asian hate isn’t enough; we need to address the systemic issues that are responsible for causing this hate in the first place. If we don’t, then the hate will never stop because the source is still active.

Growing up as an Asian American woman, I was always expected to avoid trouble and to be obedient, which led to me dismissing many situations in my life where I faced racism. I believed that staying quiet would benefit me, but that’s not the case; we need to continue to mobilize and speak up. Even something that appears harmless, like letting a classmate get away with racist jokes, actually fuels hate by contributing to harmful stereotypes.

You cannot discuss one [racism and public health] without addressing the other. Every facet of public health must take into account the impact it plays on race, as well as the impact race plays on it. The recent events help highlight how those with different identities have experiences unique to them, and thus have different qualities of life. These disparities in quality of life affect both mental and physical health, often manifesting itself in issues such as mental health treatment, life expectancies, etc.

I believe the first step to addressing any issue is an increase in education about the topic. After all, it’s difficult to work towards resolving an issue if there’s not much awareness surrounding it in the first place. 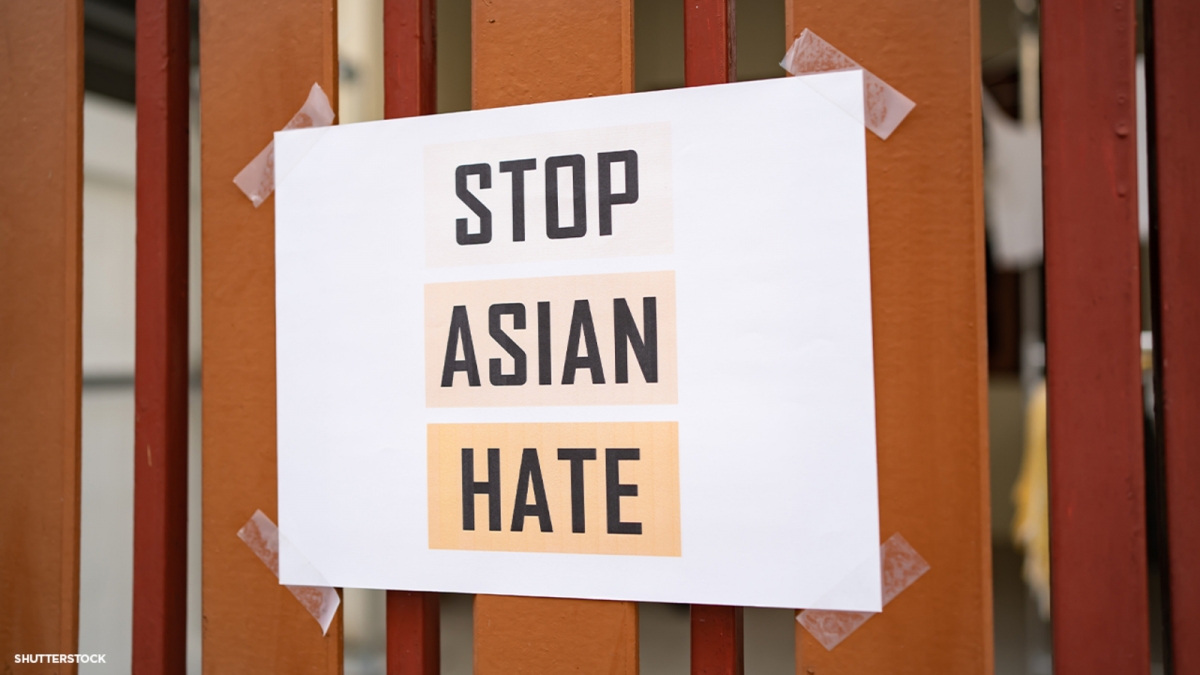