The UC Global Health Institute (UCGHI) mobilizes people and resources across the University of California to advance global health research, education and collaboration.

Letter from UC President Janet Napolitano to the UC community

Do no harm: IGHS works to deliver patient-centered care to women worldwide

UCSF IGHS has played a major role in advancing the agenda for patient-centered care during pregnancy and childbirth.

UCLA Law alumna is working to change U.S. laws that cause unjust harm to incarcerated people of color — especially women.

UC San Diego Associate Professor of Ethnic Studies suggests despite the significant contributions of black women in making the 19th Amendment a reality, their role is often unsung.​

National Academy of Engineers elects Kurtz into it's ranks

Professor Sarah Kurtz has become the first UC Merced faculty member to be elected to the National Academy of Engineering (NAE).

Is there (still) a gender gap in politics?

UC Davis professor of sociology suggests there has remained a persistent gender gap in politics over the past 40 years.

Battling brain cancer on all fronts

UC Irvine neuro-oncologist Daniela Bota’s pioneering work is improving outcomes for patients with the most aggressive form of the disease. 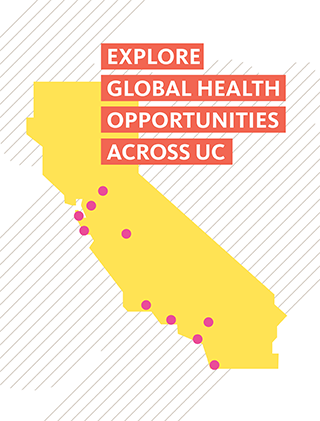 Get to Know Our Partners

Featured partner: The Congo Basin Institute finds solutions that conserve the environment and meet the vital needs of the developing world.

Get the latest global health news from around the UC system delivered to your inbox with our monthly newsletter!