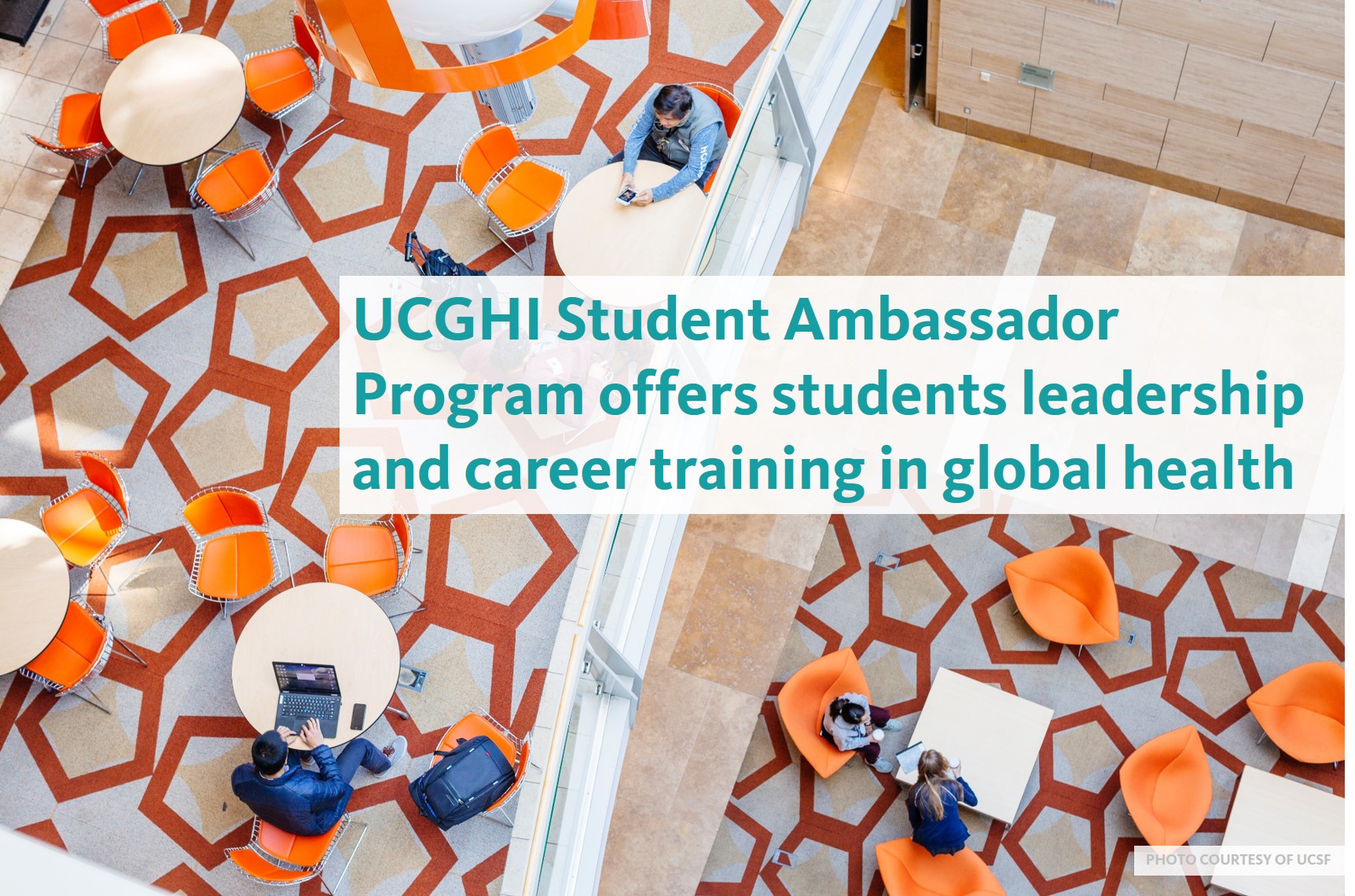 For Kalani Phillips, a master’s student in public health at UC Irvine, the best part of her two years as a UCGHI Student Ambassador has been the connections she’s made.

“Once you're a part of that little network, you get many other opportunities across the UC system shared with you,” she said. “I've met so many amazing professors and students in the program, and I'm definitely going to carry those relationships into the future.”

The UCGHI Student Ambassador Program is for undergraduate and graduate students UC-wide and this year included students at Charles R. Drew University of Medicine and Science, a historically Black university. Ambassadors choose between two areas of focus linked to the two Centers of Expertise within UCGHI: the Women's Health, Gender, and Empowerment (WHGE) Center of Expertise and the Planetary Health Center of Expertise.

The six-month program includes monthly webinars from multi-disciplinary professionals across the UC system and opportunities in their respective tracks. At the end of the program, the ambassadors present on a planetary health or WHGE topic they’ve studied in multidisciplinary teams. Seventy students participated in the 2020 to 2021 academic year.

For Phillips, a highlight of her time as a planetary health ambassador last year was reviewing proposals for global university campus-based violence prevention research projects. This year, as a WHGE ambassador, she joined Courage First and UC Speaks Up to spread awareness about and prevent sexual assault and violence.

UC Speaks Up held virtual screenings and student discussion panels at each UC campus of the Emmy-nominated documentary At the Heart of Gold, which covers the sexual abuse scandal at USA Gymnastics. Phillips moderated the panel discussion at UC Irvine, which was “truly an amazing experience because I learned so much about sexual assault prevention and how to better support victim-survivors from the experts themselves,” she said.

For its presentation, Phillips’ team covered the double disparity African Americans face with higher rates of infection and death from COVID-19 and HIV/AIDS.

“Given the events of the past year, I think that racial disparities are really important to address, so I was really happy that everybody wanted to work on this project,” she said.

Phillips plans to use what she’s learned and the connections she’s made in the program in her studies towards a public health doctorate at UC Irvine.

Pearl Ibeanusi, a planetary health ambassador and an undergraduate student at UC Santa Cruz, said learning more about injustices and how to solve them was a highlight of the program for her. A mother of six and an immigrant from Nigeria, Ibeanusi described a UCGHI researcher telling the ambassadors about a project she led in Africa to provide reproductive care and education for girls and women. The project included working with local drugstores to make it easy for girls and women to get menstrual products, condoms, HIV tests, and other needed resources.

Taboos about female sexuality and reproduction can leave girls and women in some African societies with little power over their reproductive health and whom they marry, Ibeanusi said. The project gave girls and women “control over their body and over their lives,” she said, “and provided education to the drugstores and pharmacies who otherwise will look at those girls as is if they are bad girls.”

Ibeanusi, who said she has been shocked by the depth of poverty in a country as wealthy as the United States, studied food insecurity and health for her team’s final project.

People who are food insecure often struggle in other ways, such as not having reliable transportation, health care, or safe housing, she said.

“Those are the social and societal determinants of health, and the roots cause of health disparities, especially among the vulnerable and the impoverished,” she said.

Career contacts who’ve viewed her resume are impressed by her participation in the ambassador program, Ibeanusi said. She plans to spend the summer working in the city of San Jose’s Office of Emergency Management. After finishing her undergraduate studies, she plans to pursue a master's degree in public health or health science and management and find a position promoting social justice.

For Habiba Naqvi, a WHGE ambassador and master's in public policy student at UC Riverside, learning about health injustices women face globally and women of color face in the United States was a highlight of the program.

“There's not enough attention given to it, and even if there is attention, there's just not enough laws to protect their rights,” she said. The program helped her understand “the different cultural aspects that allow for certain injustices to happen and how to create a space first for women to come forward and explain their experiences,” she said.

Naqvi and her team studied how HIV/AIDS affects women and the LGBTQ community. Many countries provide few resources to sex workers to prevent and treat sexually transmitted diseases, Naqvi said. Girls may get little education on reproductive health, and social taboos can prevent physicians from best helping the girls and women they treat, she added.

Naqvi hopes to use what she’s learned as an ambassador in a health care or health policy position promoting women’s health after she graduates.

Austin Hudson, a master’s student in biomedical sciences at Charles R. Drew, chose the planetary health track. For its presentation, his team covered how countries that emit large amounts of greenhouse gases and other pollutants hurt those that don’t. He studied how climate change harms health, including diseases caused by air pollution and increasing threats from infectious diseases.

The topic reflects what Hudson feels was the highlight of the program for him: “learning how life is interconnected, regardless of location and species,” he said. “We have to share the same earth.”

Hudson plans to apply that understanding when he reaches his goal of becoming a physician. Thinking about how life is interconnected makes people more empathetic and compassionate, he said.

“Those are two very important traits when treating people, especially during their most vulnerable times,” he said. “You're looking at not just the person and their illness, you're looking at their circumstances and quality of life.”